Did you ever do that thing where you blew off two weeks of college/university, and then you struggled to figure out a super-nonchalant/casual pathway back into the classroom? All the while thinking the professor was going to grind your butt to beanmeal? And then once you had the balls to reemerge, you did so with a vengeance? Well apparently me too. Only I didn’t do it in school; I did it on my own website. And in response to a mild-mannered, cursing-and-swearing doodle post.

Thus, after a prolonged delinquency, I’m back. Which may be good or bad. I mean a deke.com without a Deke is, at the very least, harmless. A deke.com with a Deke results in this:

I really haven’t the vaguest idea what is happening in this lightly pastoral tableau. I only drew it.

(And as any court reporter knows, you never question the scene. You merely capture it.)

But I do know this: That thing above is a multi-layered file from my Photoshop CS5 One-on-One: Mastery video series coming next month to lynda.com. (Honest, I’m not pimping. I’m just providing you with my first-person testimony into what is, um, that thing above.) Plus, the graphic is very colorful and alarming and stuff. You know, I mean, for the sake of junk.

In all earnestness, despite the silliness of the above graphic (and text), I have been trying like crazy to wrestle to the ground two of Photoshop CS5’s newest and most rambling features, bristles brushes and the mixer brush tool. And I think I might have actually done it. Chapter 31, “Bristle and Mixer Brushes,” offers 2+ movies on the topic of everything-you-ever-wanted-to-know about how Photoshop’s newest traditional painting tools work. Which is to say, they’re not traditional painting tools at all, they’re digital simulations. (As goes with evertything in Photoshop.) And remember, these new features are not just for artists. These are tools for enterprising photographers as well. If only you should so dare to try.

(The robot did. And he paid for his audacity. But you? I dunno. I look at you and I think, heck, you might just get away with it.)

Next entry:Martini Hour 078, In Which We Consider Dropping the “i” In Honor Of Our Guest

Previous entry:Martini Hour 077, In Which Deke Is Surrounded by Charming, If Foul-Mouthed, Women Who Defend Your Ri 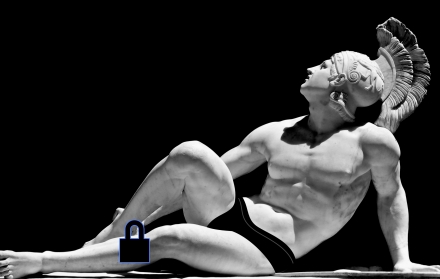