This week’s clip show features me repeatedly telling two of the most knowledgable Adobe Illustrator gurus on the planet that I don’t know squat about Illustrator. (I’ve probably mentioned that more times than I’ve explained that Deke’s new book, Adobe Illustrator CS5 One-on-One, is taking over our lives and requiring us to compile clip shows.) But how can I still claim to know nothing when I get to hang out with Deke and Mordy Golding for several episodes of the show? Mordy, the one time Adobe Product Manager of Illustrator, is that guy that Deke likes to go to when tiny gaps in his copious Illustrator knowledge requires him to probe the brain of someone he trusts. Can an Illustrator Ignoramus do any better?

Here’s how we kick off what I’m unofficially calling “Illustrator Celebration Month in the dekeLounge,” also known as “Learn Something Already, Colleen.”

We first met Mordy (in the lounge context) in Episode 014, where Mordy revealed his favorite color is yellow. It’s either because it’s the color of the sun or because he was influenced early on by the Man With the Yellow hat. Meanwhile I silently wonder if explains Mordy’s affinity for Illustrator, whose official Adobe theme color is yellow. Hmm…

In Episode 031, Deke and Mordy discussed the various aspects of transparency in Illustrator, including that so-named panel which might be a real secret handshake. Learn how to open the secret treasure trove of features hidden within the Transparency panel. We, and by “we” I mean “them,” discussed the hidden gold of opacity masks.

(Reflective note here, Deke has now succumbed to calling them panels. My how things change. My how the girl is proven right eventually. )

In yet another conversation with Mordy from Episode 070, we chat about why the CS5 incarnation of Illustrator might be the best yet. Highlights include helpful little fixes that make your workflow better, new features like bristle brushes and perspective drawing, and things that challenge the way you understood long-time features like variable width and multiple art boards that work. (Want to know more while you’re waiting for Deke? Check out Mordy’s Real World Illustrator book that actually exists already!)

By the way, we must love Mordy, because we keep letting him back in the ‘lounge. In Episode 071, we chatted with Mordy about dynamic effects in Illustrator. You don’t get a sample of it here, but if you, like us want more, more, Mordy, it’s worth checking out.

Where else can you sit with two vector superheroes and observe the dekeLounge’s unofficial Illustrator celebration? Here’s the regular-quality audio file. You can stream, or for best results, right-click and choose Download or Save. Here’s the high-res version; you’ll want to download rather than stream. And don’t forget our usual plea to subscribe via iTunes.

Thanks for bringing us so much yellowy Illustratory goodness, Mordy. Cheers! 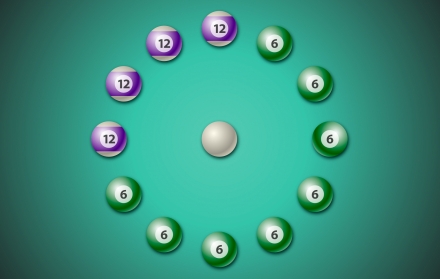 Deke clicks another hour closer to finishing his imaginary pool-themed clock by using Adobe Illustrator's Rotate and Transform Each command to get the hour balls in place and upright.